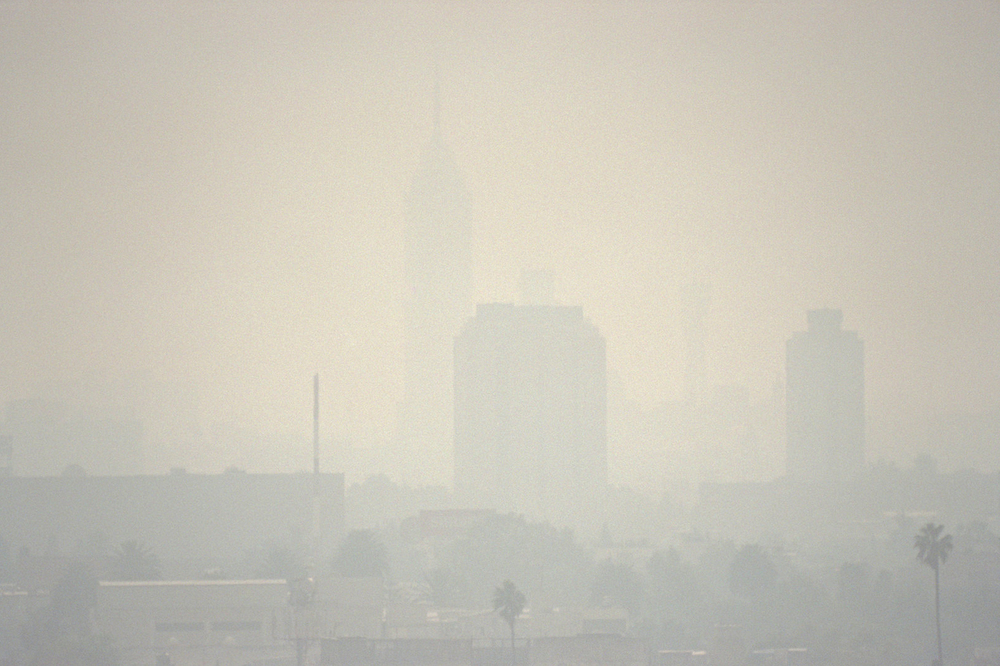 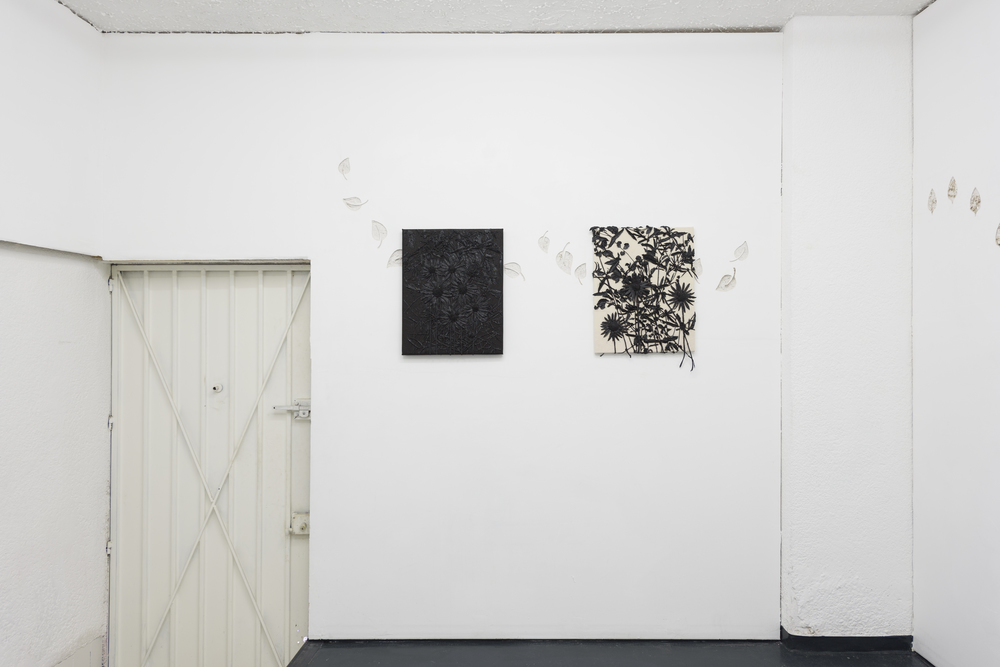 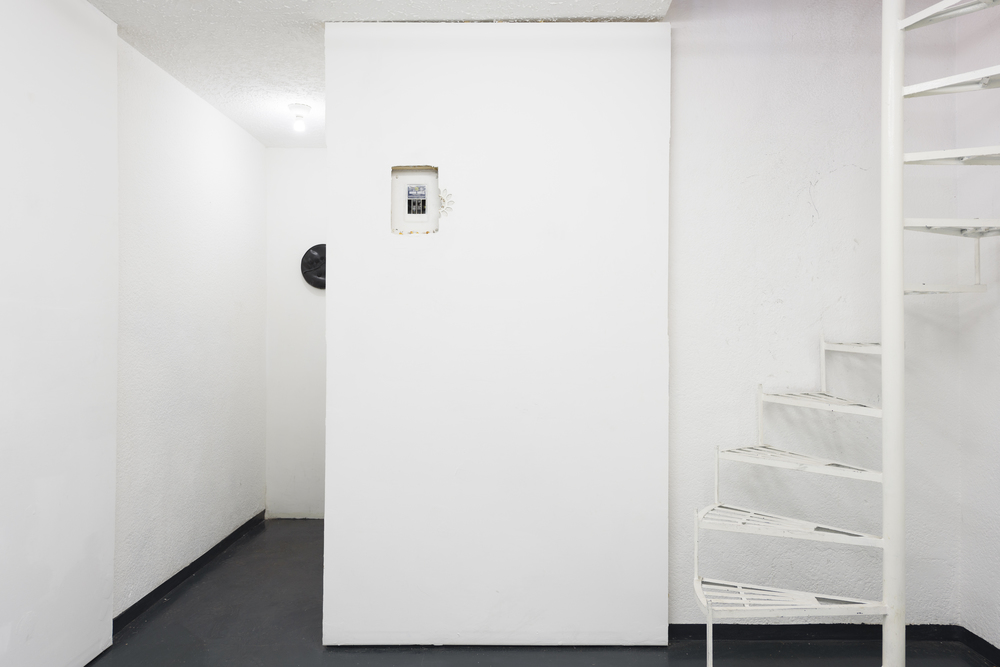 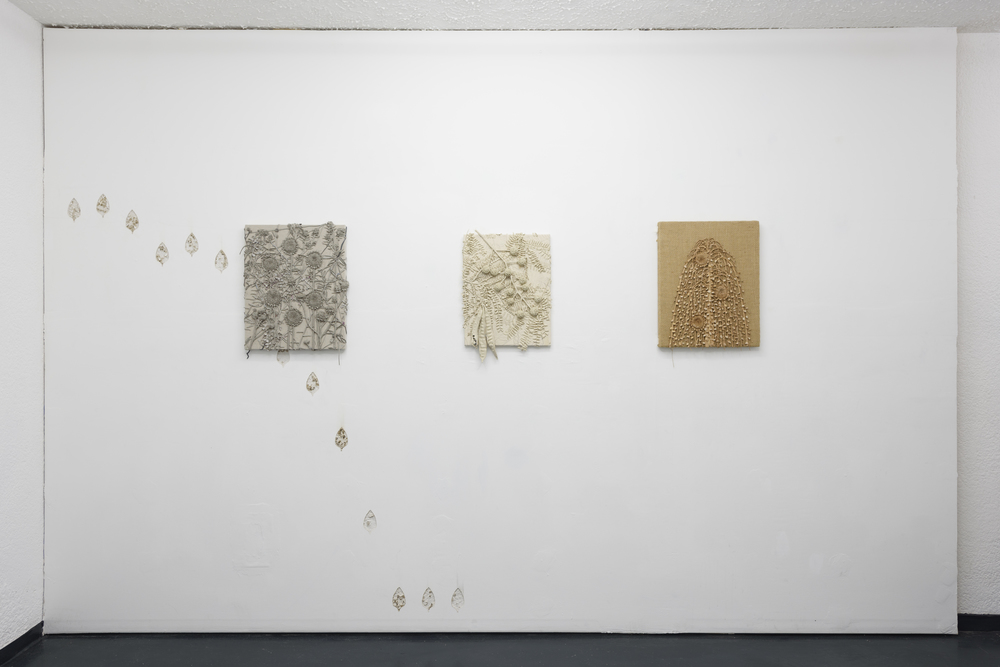 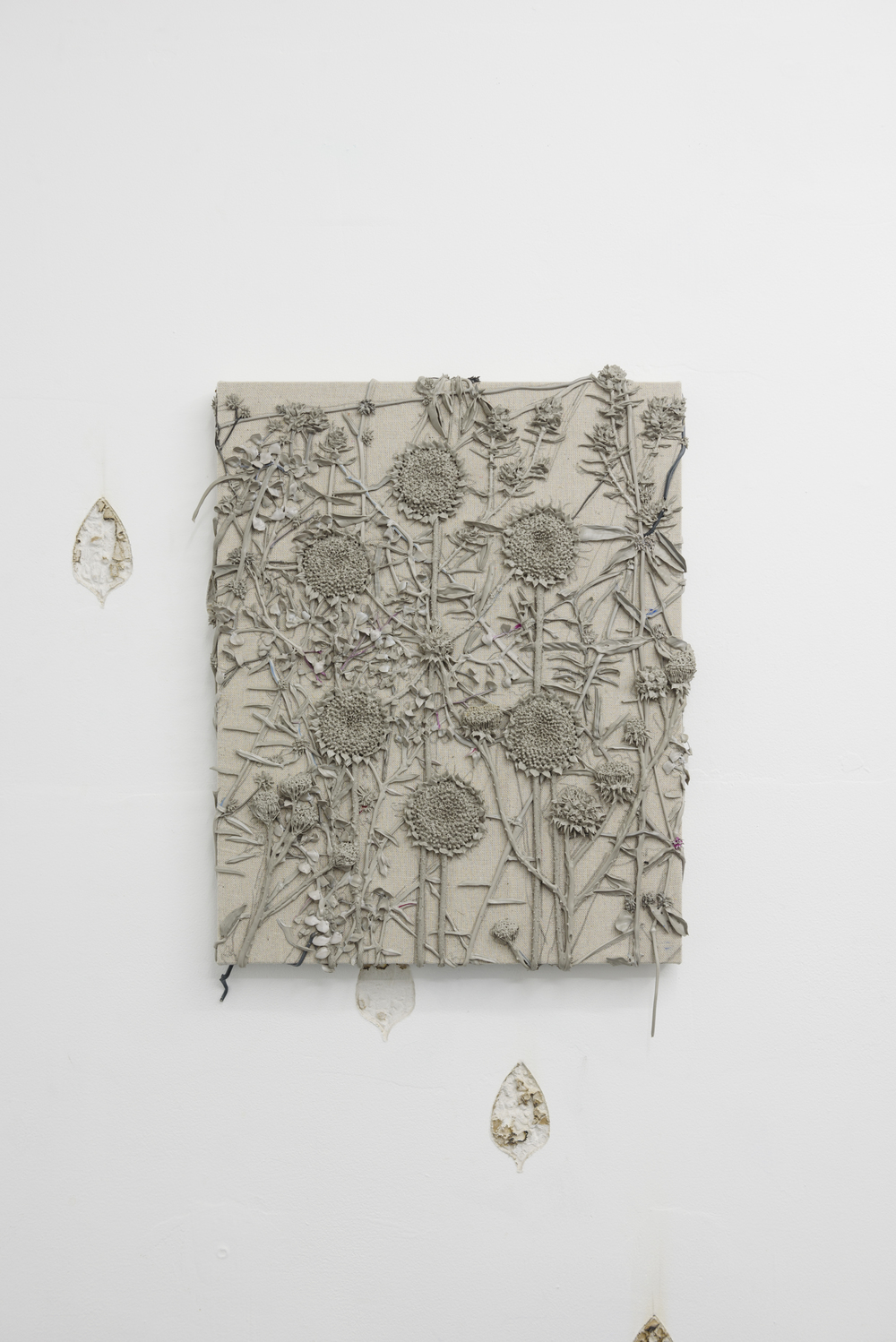 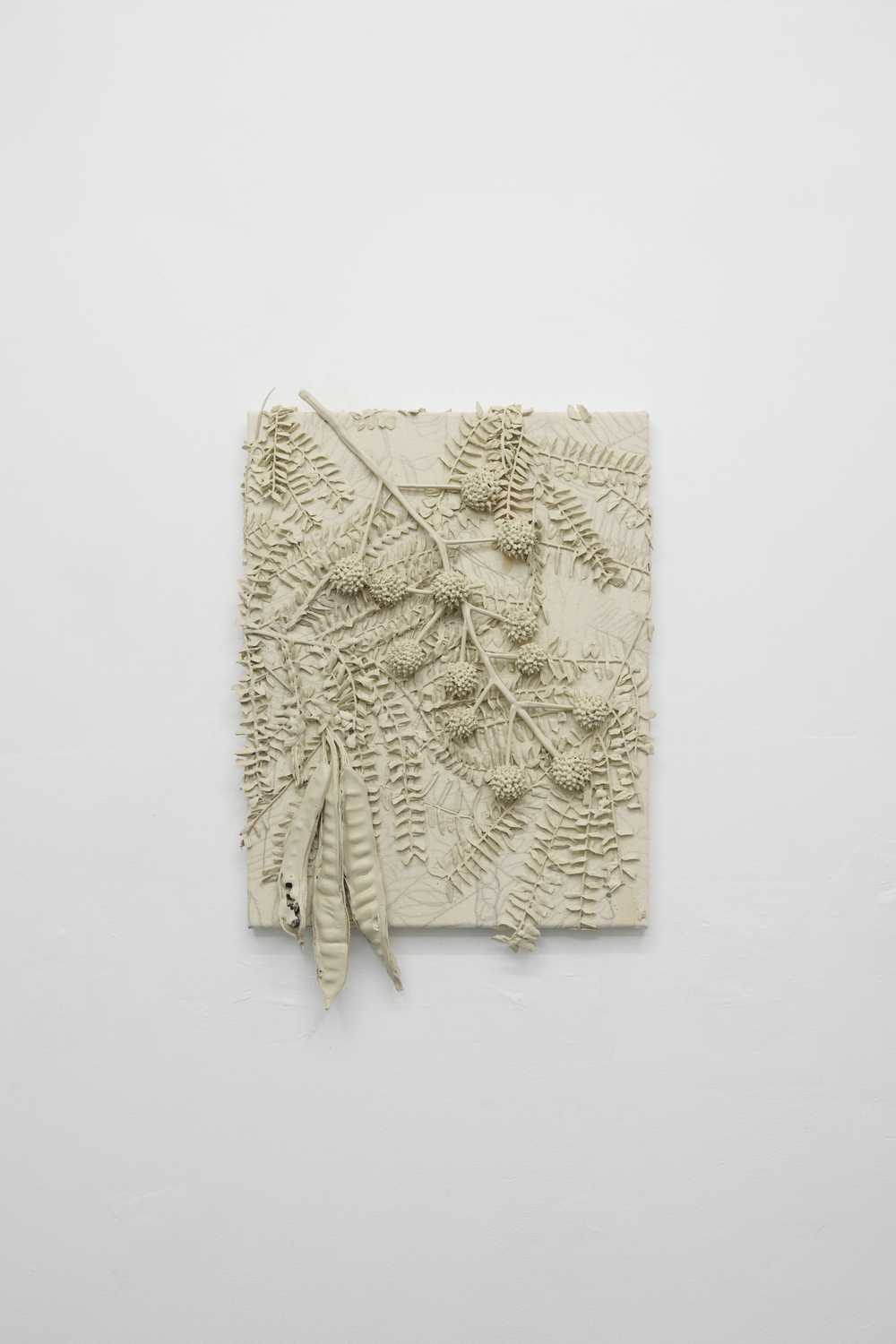 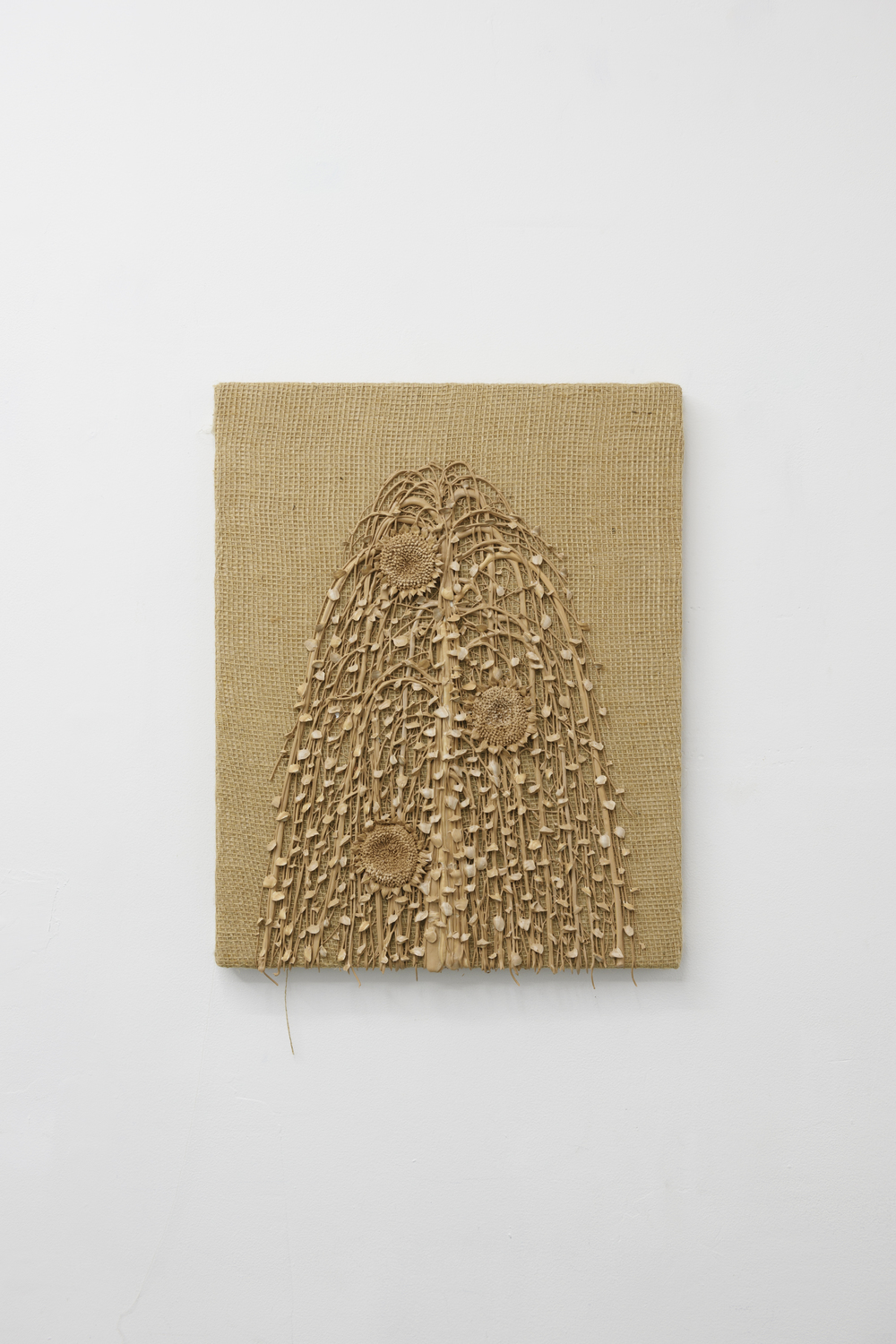 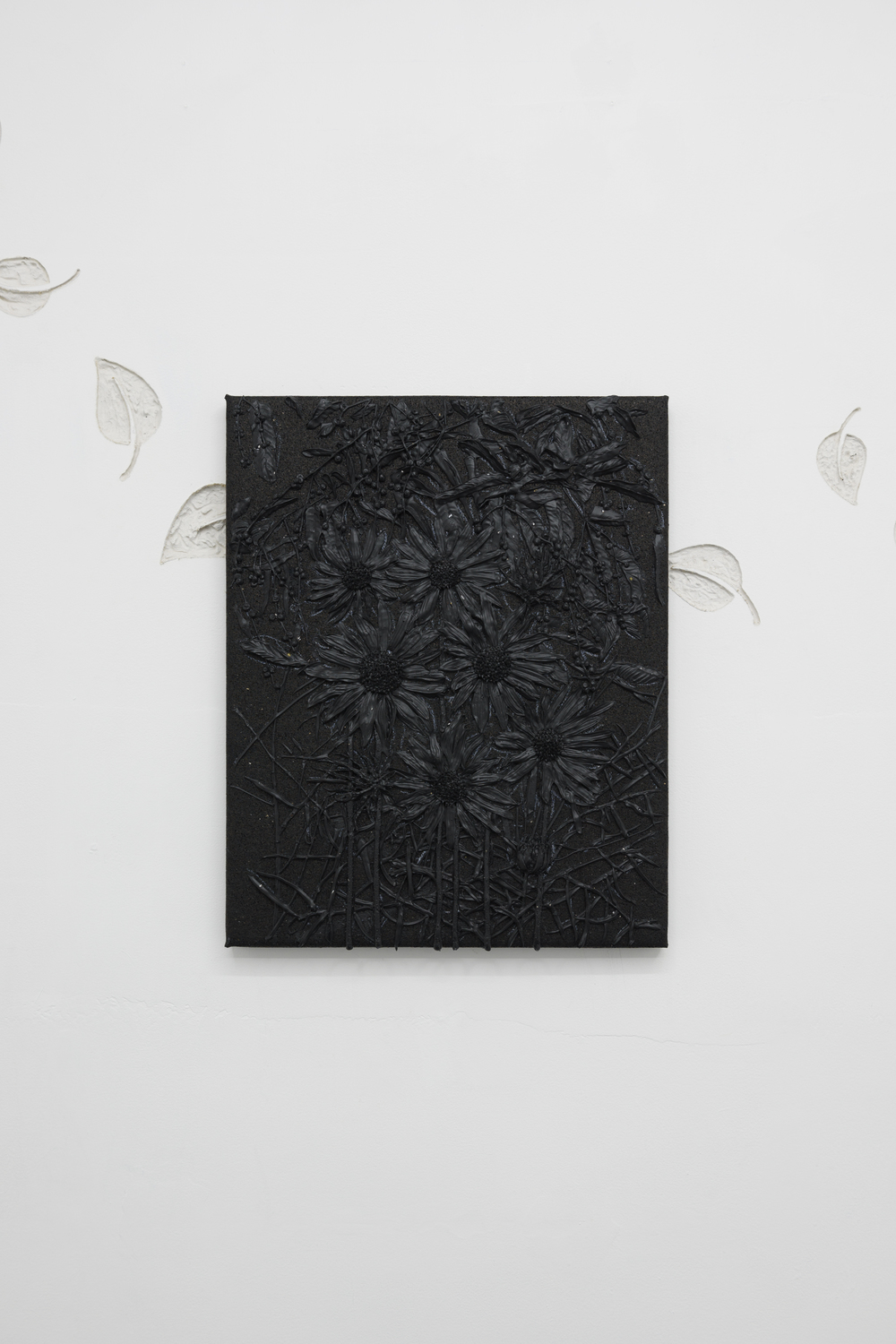 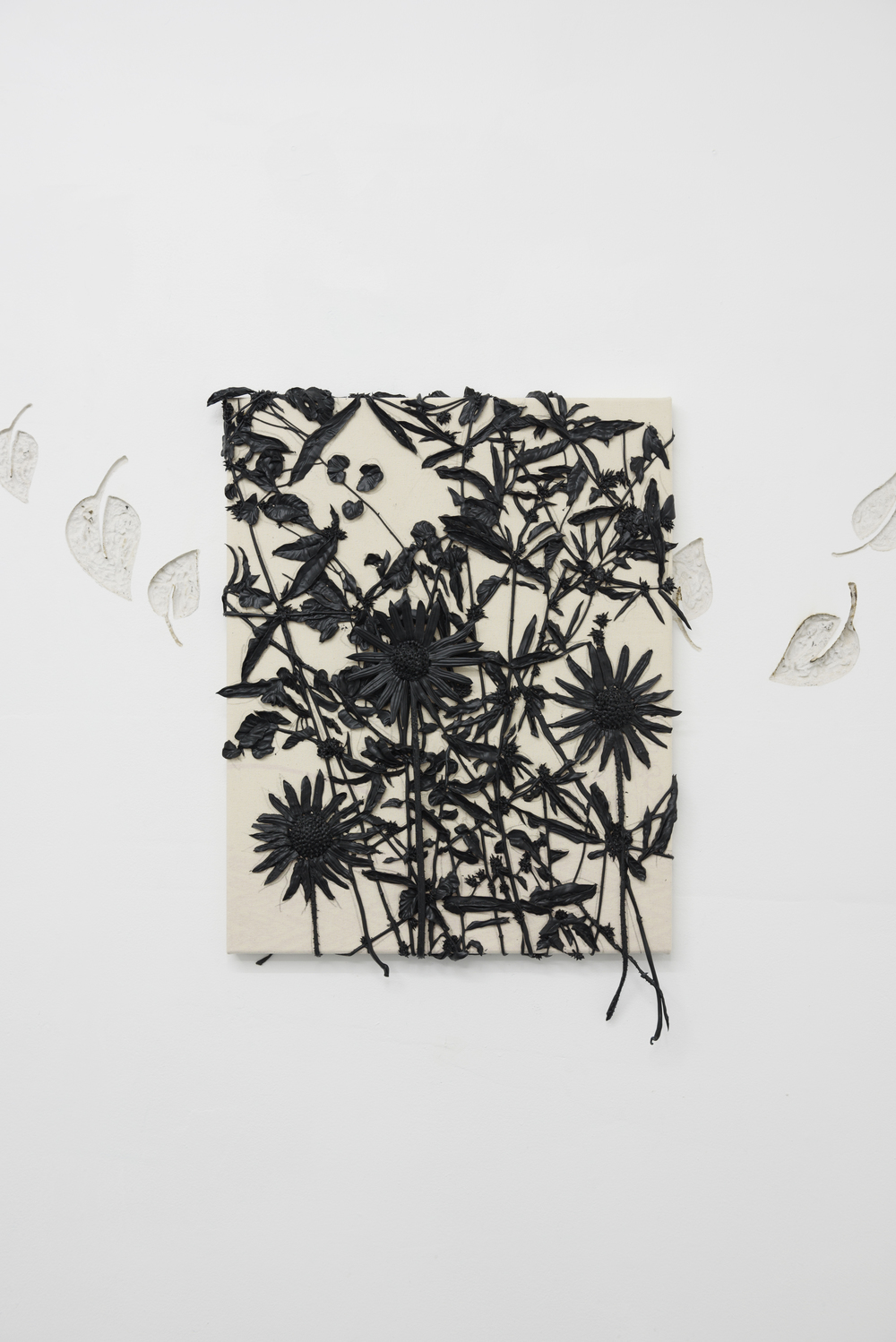 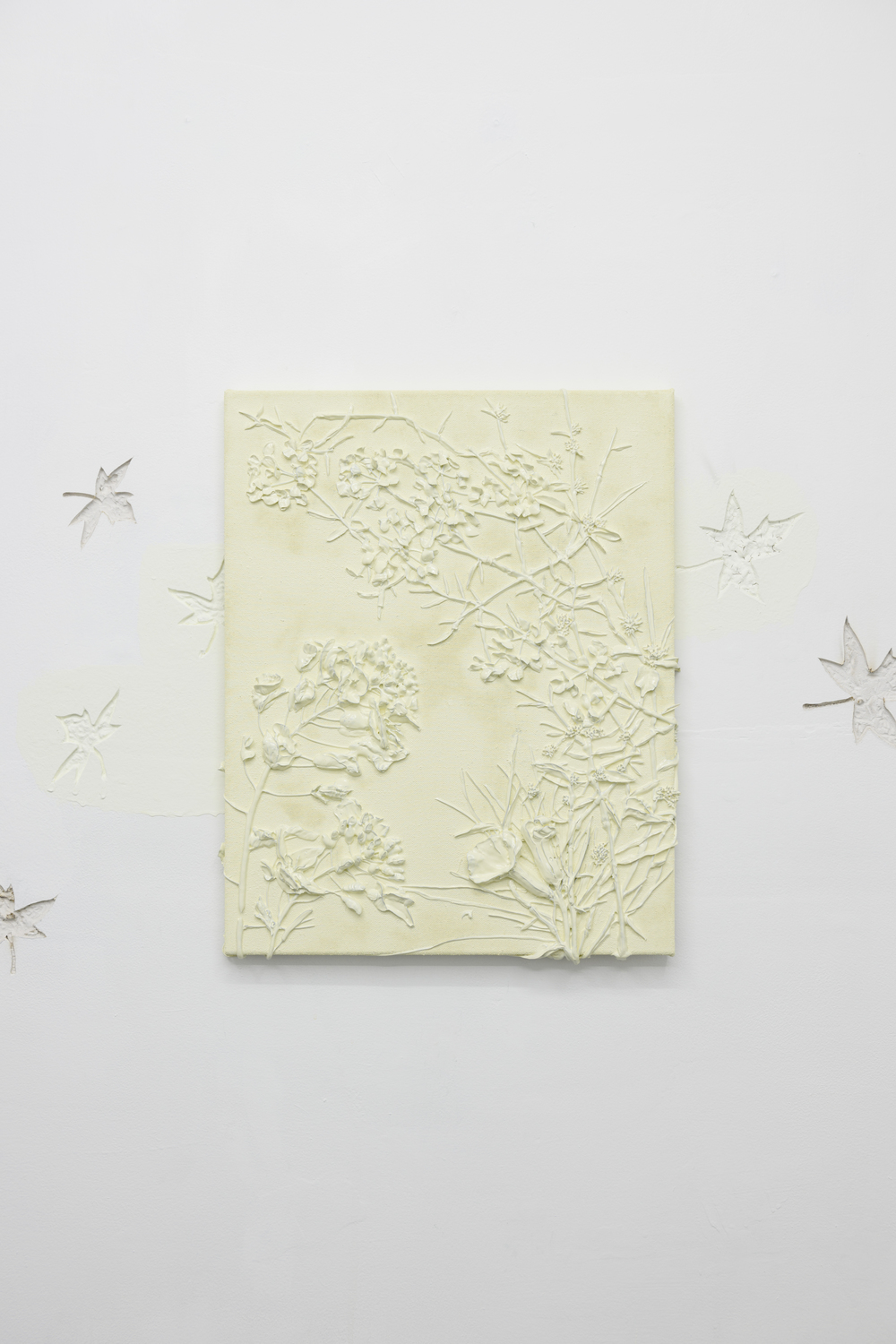 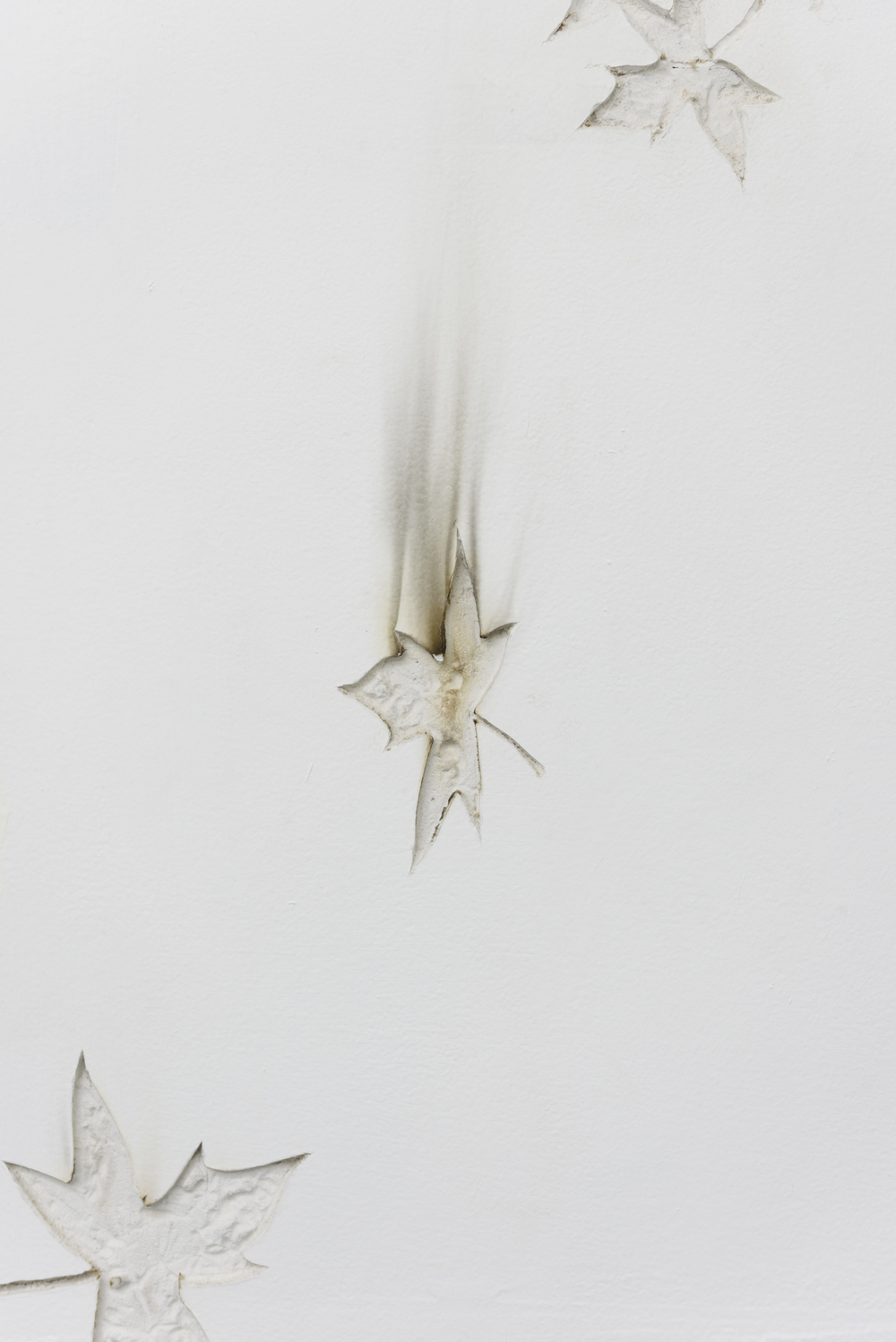 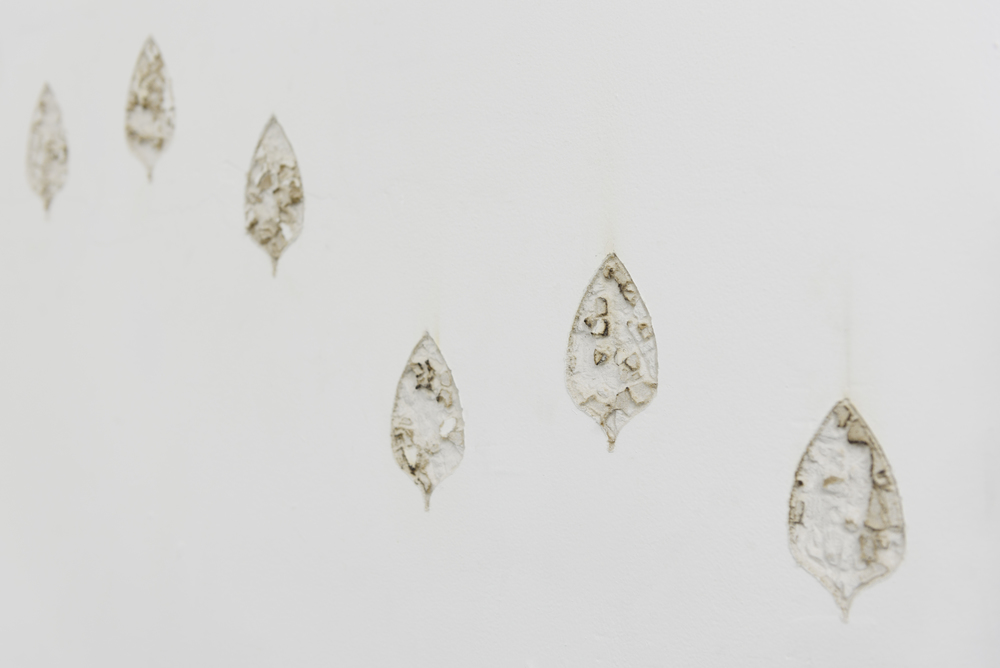 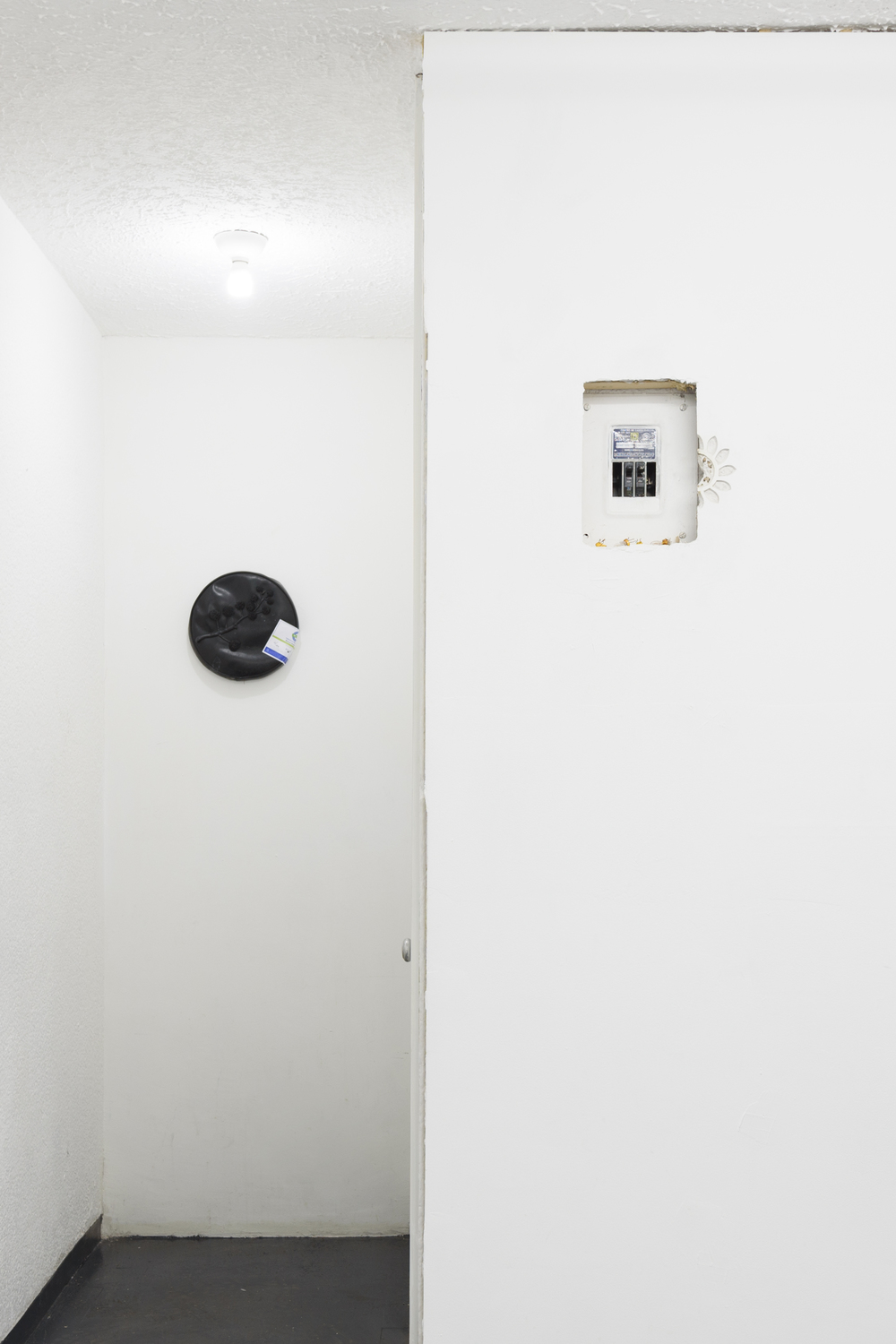 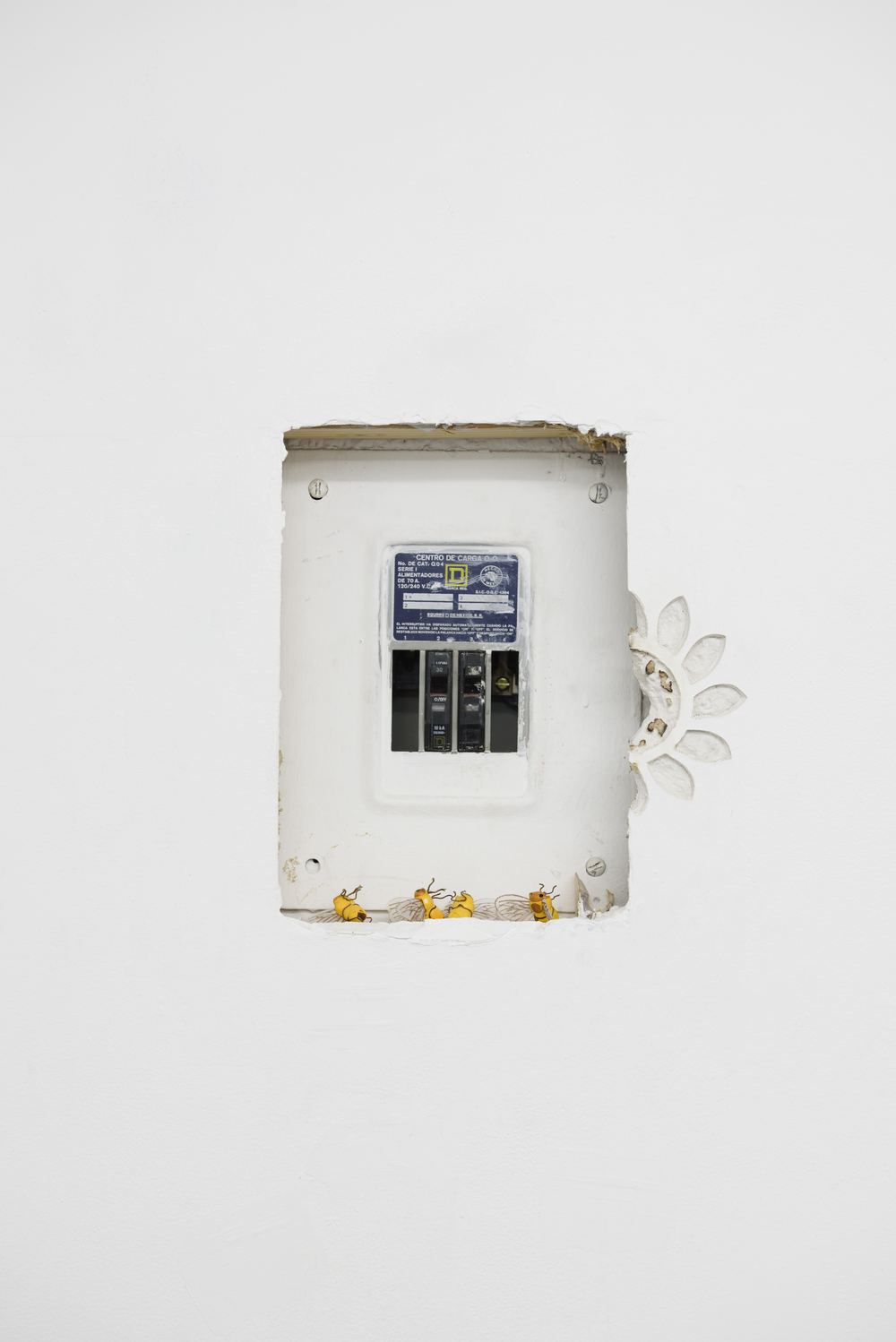 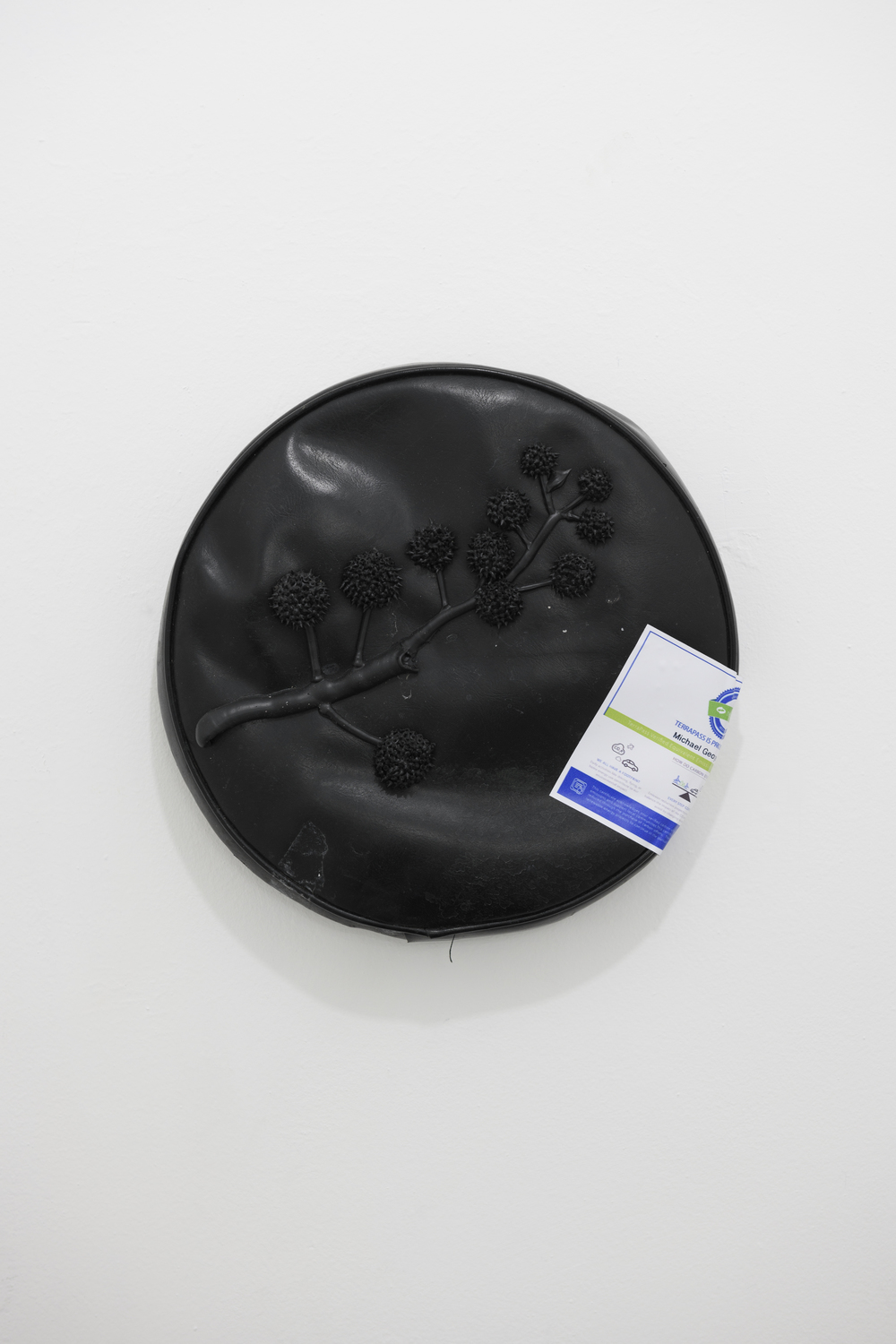 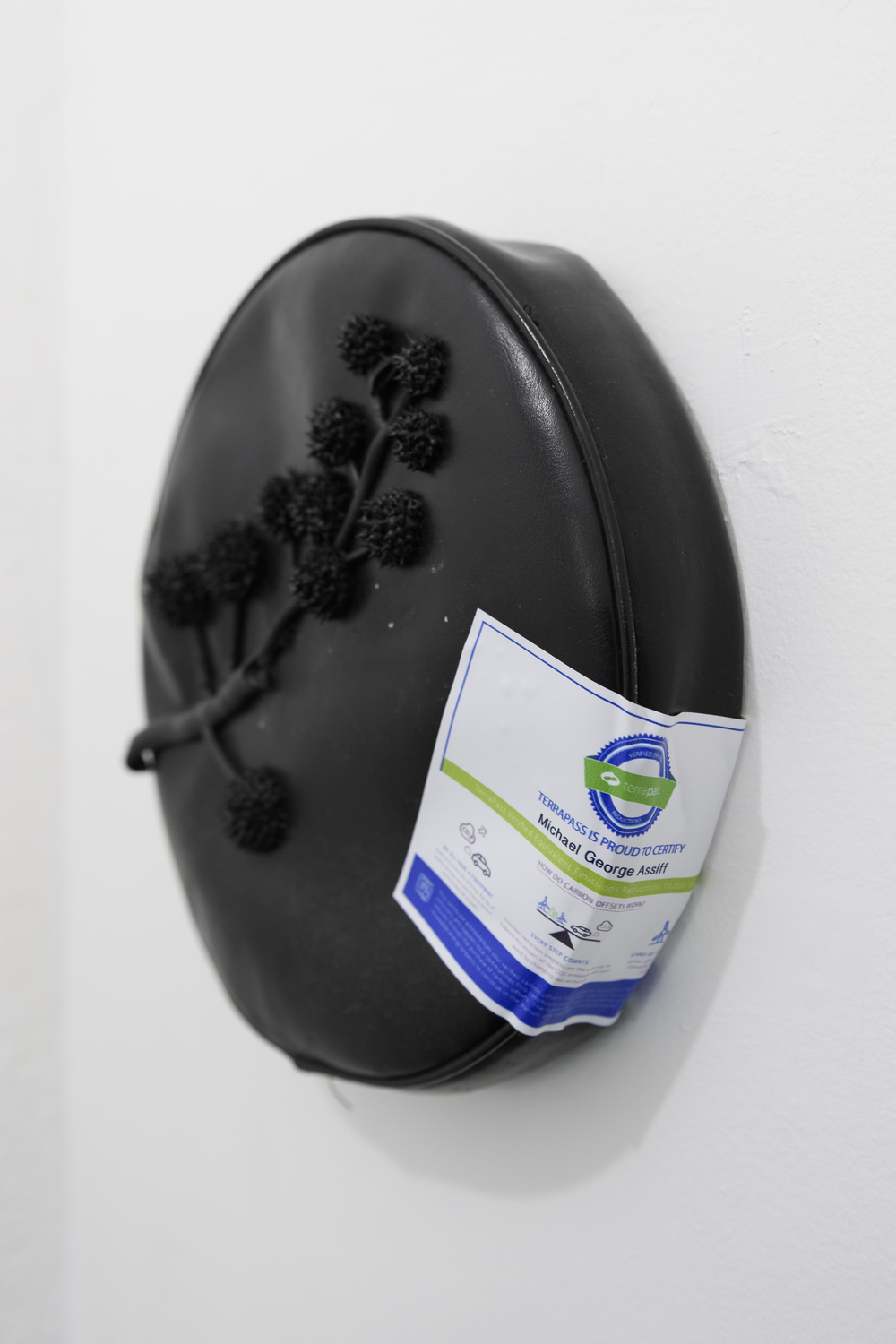 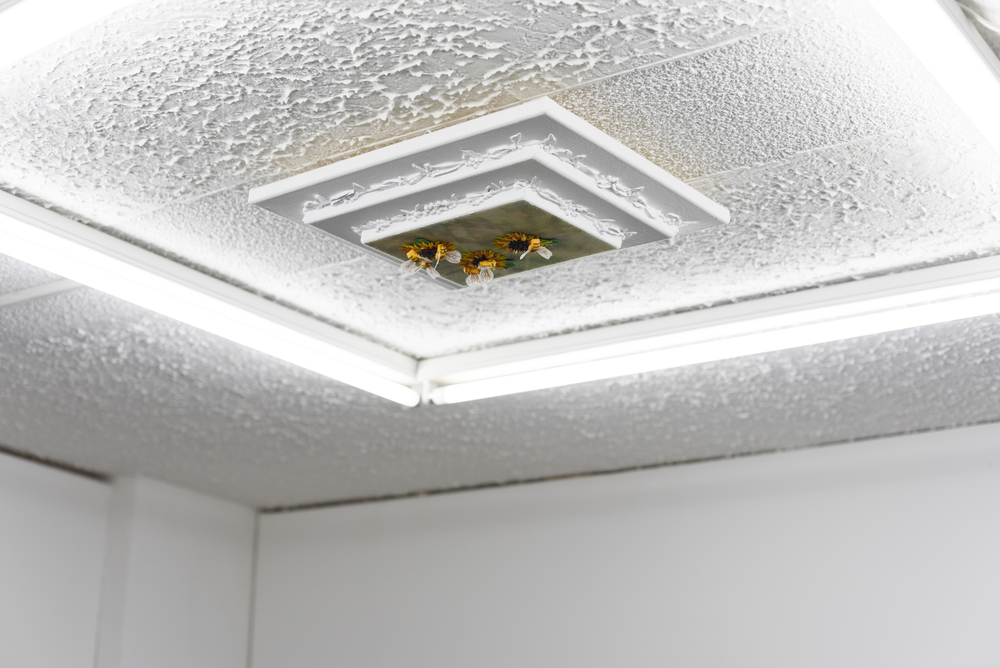 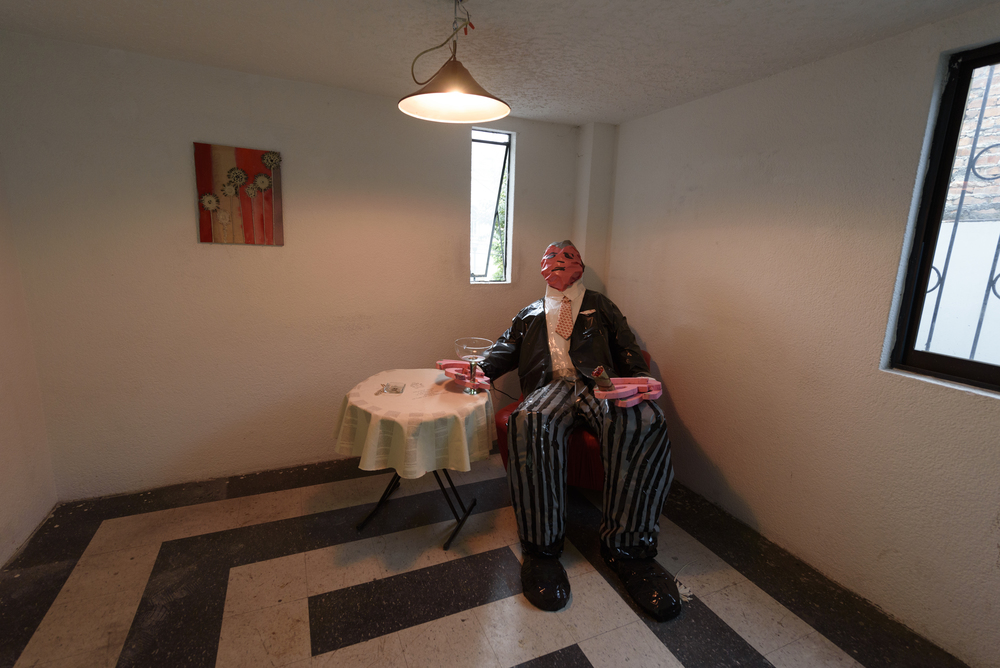 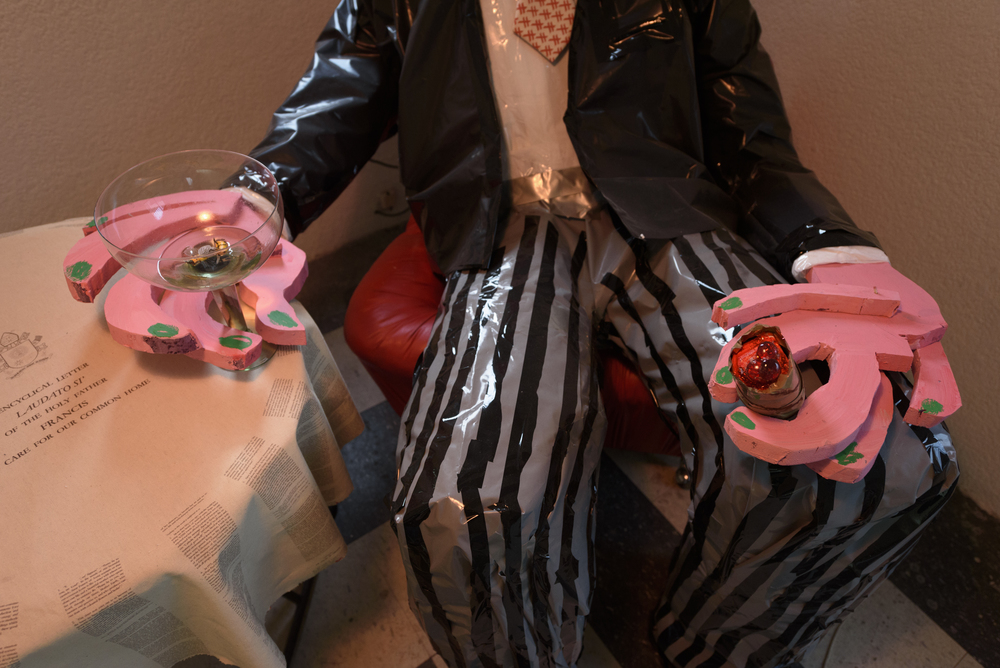 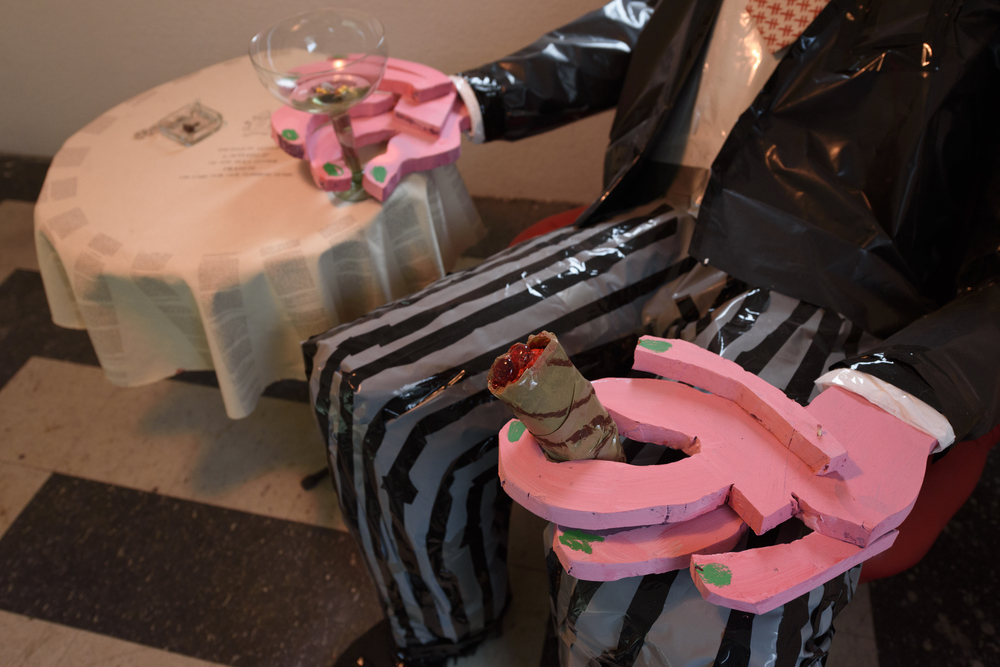 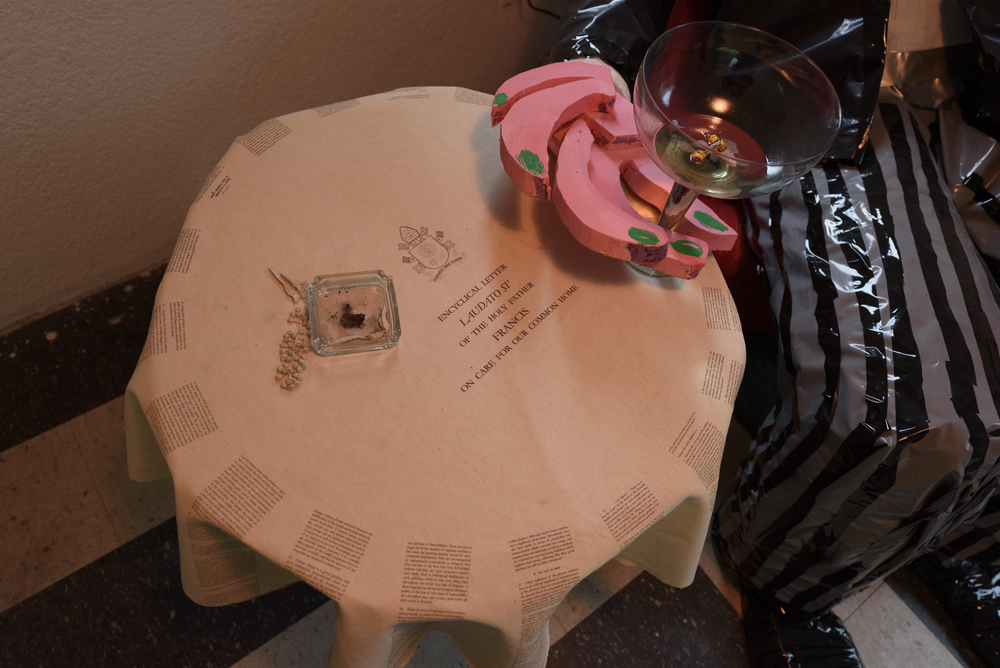 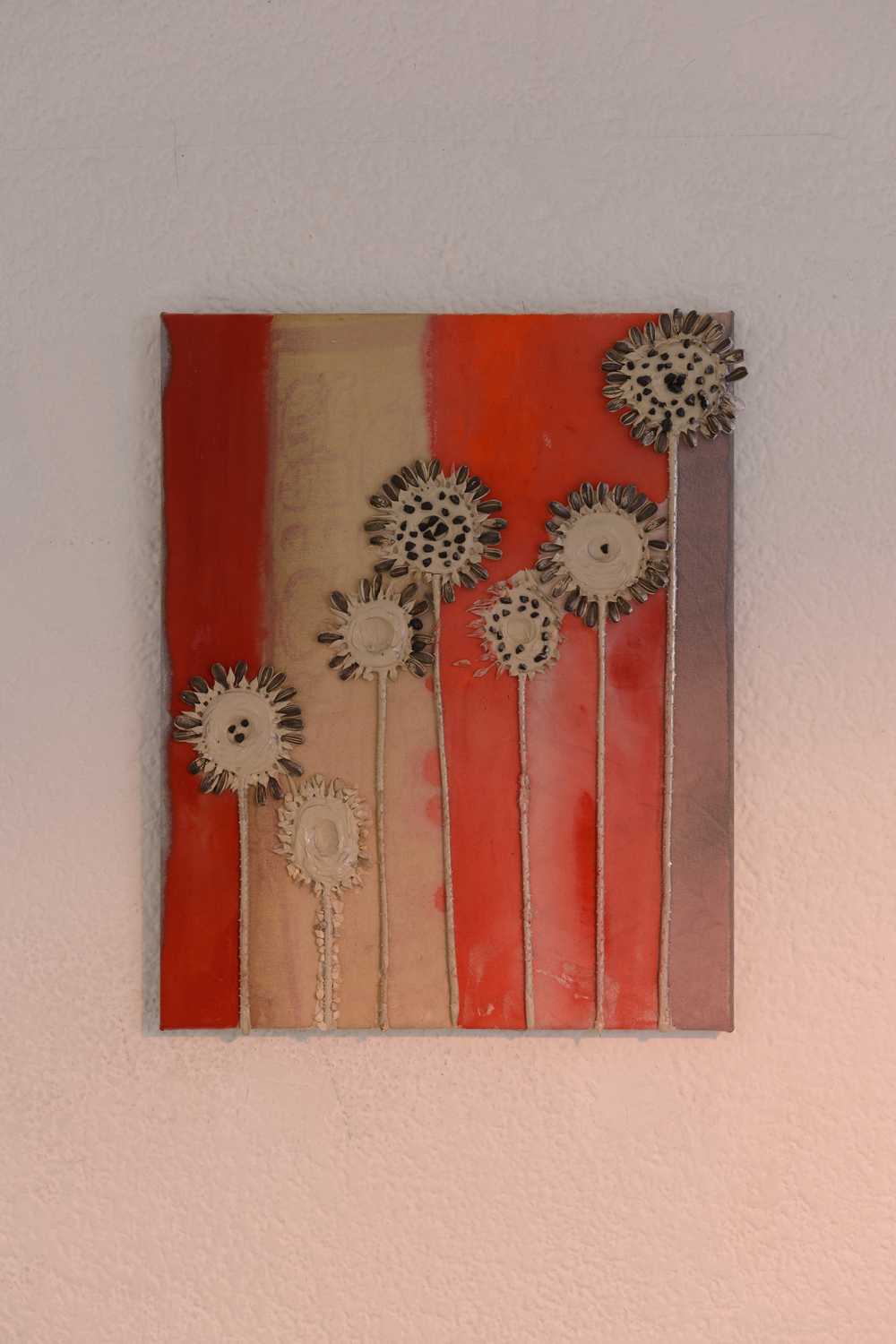 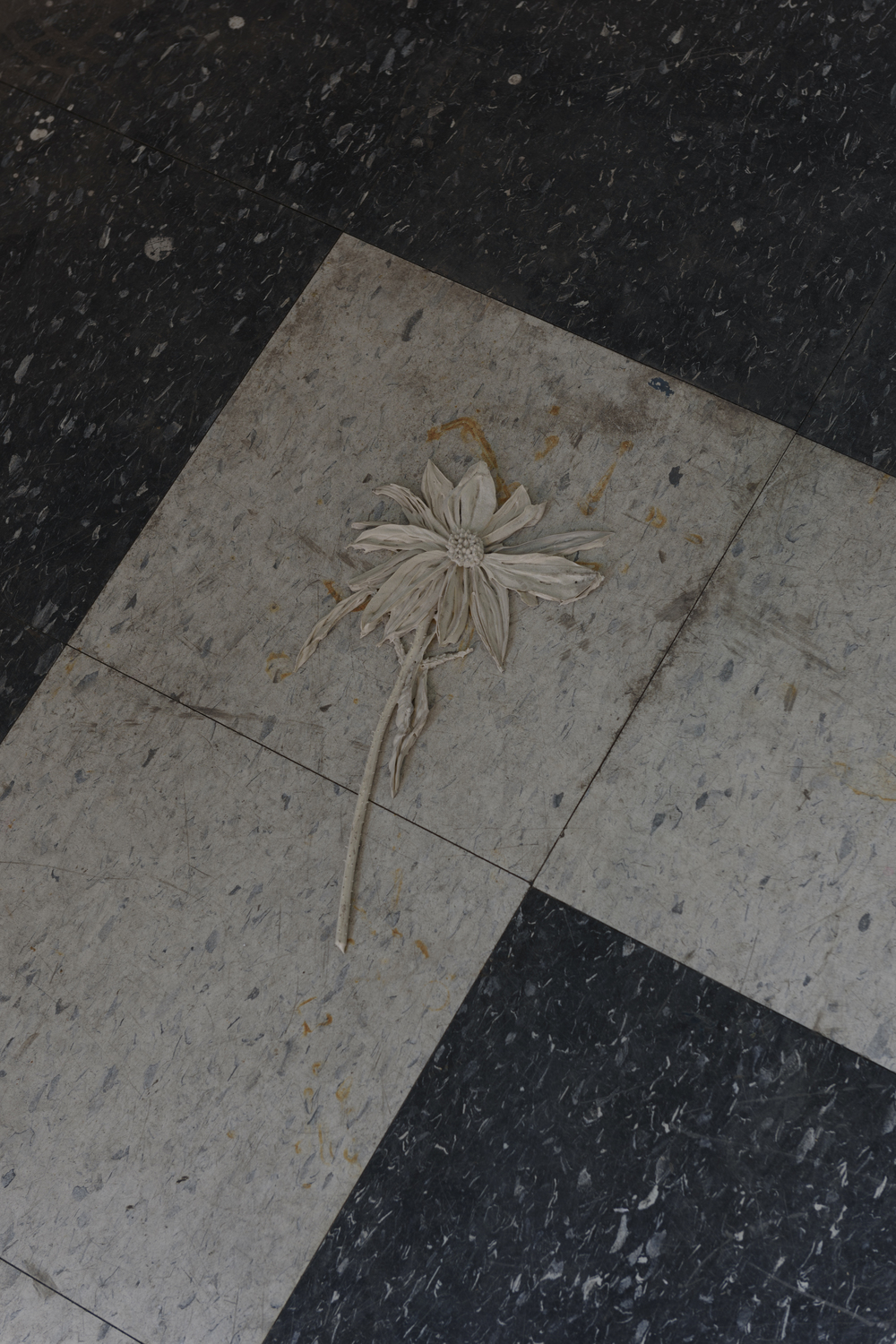 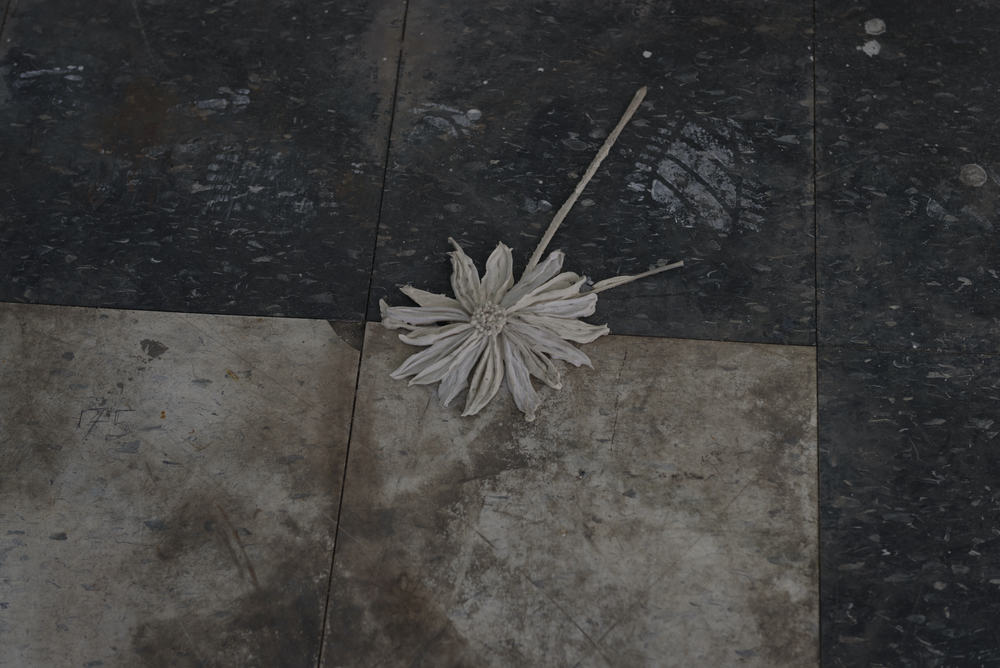 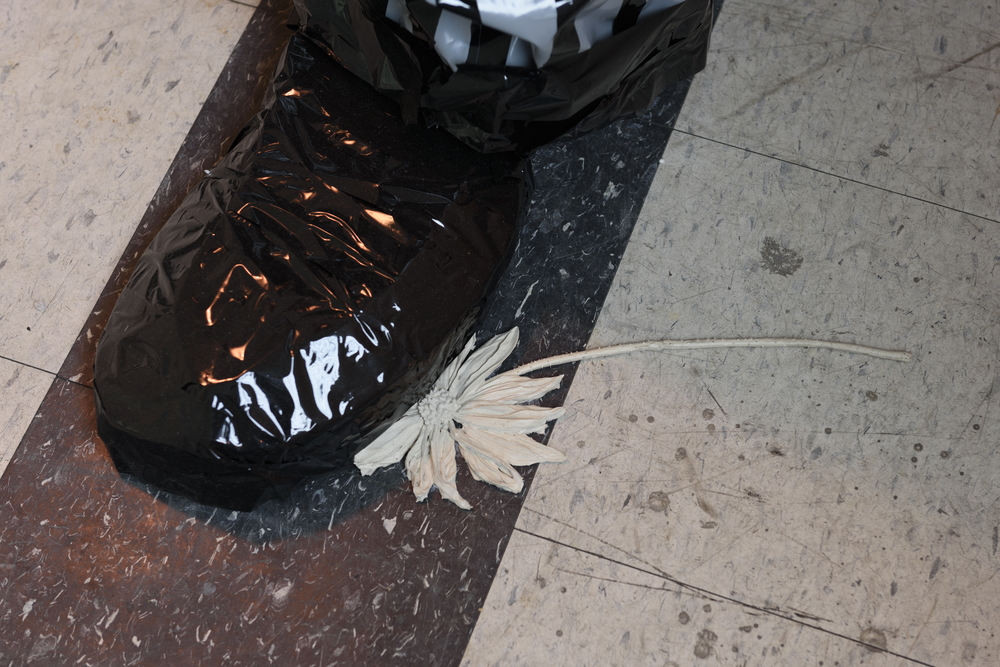 Ozone Flowers, a show by New York-based painter Michael Assiff, has two
pressing events in mind: the onset in 2017 of the Mexican ‘Cap and
Trade’ carbon market to reduce greenhouse gasses, and, to the country’s
north, the ascent to power of a new climate change-denying political
regime. Strung together, the ecological tableaus Assiff creates denote a
new world order, a shift in cognizance from which it seems there is no
return.
Plastic and metal low relief paintings depict colorless “ozone flowers”,
unrecognizable within their own ecosystems. They hang upon gouged and
pockmarked walls. The engraved and burnt petals of the “carbon offset”
wall works resemble the lyrical movements of musical notation and the
eerie aftermath of a war scene. Their scattered compositions graph the
fluctuations in carbon prices. A layered ziggurat sculpture inverted on
the ceiling, surrounded by a congregation of bees, acts as a reversal of
a ritualized, pre-modern relationship with nature. The confectionary
pseudo-beehive emits an engineered fresh flower scent, one that
scientists have found more palatable to bees that no longer recognize
flowers having grown in high ozone environments. Atop a pleather stool
cushion, a round painting of leucaena leucocephala, the first tree
species to be deployed en mass to combat climate change, is stickered
with certified receipts of the voluntary carbon offsets purchased by
Assiff to cover his footprint in creating the show.
On the second floor of the gallery, a sculptural collaboration with
artist Chelsea Culprit is a purposeful moment of departure from the more
elusive metaphorical and schematic depictions below. US Secretary of
State and former CEO of ExxonMobil, “Rex” sits with a copy of Pope
Francis’ Encyclical on Climate Change published in 2015. Here the
artists make sure nothing is left to interpretation as to who sits atop
the distorted informational order and warped natural world the viewer
encounters in the gallery below.
Ozone Flowers is the second installment of the painter’s inquiry into
post-industrial ecology. In the first, Remediation Flowers at First
Continent in Baltimore, Maryland, Assiff depicted nature as a filtering,
remediating tool –an industrial instrument within the larger postindustrial
matrix. Along with lead abatement wall works and a
bioremediation project in the ventilation system of the gallery, Assiff
painted pictures of ‘Hyperaccumulators’, plant life used to suck metals
and toxins from soil no longer viable due to manufacturing. Assiff asks
the viewer if art can be a redemptive process, and the gallery a
regenerative space.
In Ozone Flowers, nature is presented as an economic instrument - a
token within an anthropocentric landscape driven by growing capital. In
this environment, pollution is no longer a subject of industrial
development, but instead a post-industrial financial right. Plant life
is little more than a symbol used for economic strategy, a means for
appeasing lax environmental regulations to turn a profit. In Ozone
Flowers, the question of redemption is posed within a system whose
structures of power have made its own logic all but impenetrable.
Something has been entirely lost. To remediate an ozone-soaked reality
one must turn to the remote language of monetized values and create
cogency within the unnatural.
- Nika Chilewich
Michael Assiff’s puffy paintings get their direct cue from post
impressionist inquiries into nature and space, and an enlightenment-era
understanding of nature in the grass factory of modernism. His work,
which the artist has directly linked to that of Henri Rousseau, relies
on a metaphysical relationship of jungle to plastic. This subject/
material relation foregrounds the Hyperaccumulator and Ozone Flowers
Assif creates, in which plants are instrumentalized to perform
bioremediation of brownfields or serve as bartering tools for
unregulated industrial development. His approach to painting includes an
exploration of the site of exhibition, and a painterly inquiry into
installation work as a means of story telling through location.
Embossing and relief onto infrastructure and architectural elements
allows Assiff to interrogate certain types of structural violence, and
the way violent pathologies are naturalized as heritage and embedded
within the built environment.
Assiff has had solo presentations at First Continent, Md; Good Weather,
AR; and NADA, NY with Martos/Shoot the lobster. He has participated in
group shows at Valentin, FR; Room East, NY; Jack Hanley, NY; Salon 94,
NY; American Medium, NY; and Balice Hertling, FR. He has forthcoming
group shows at High Tide, PA and Helena